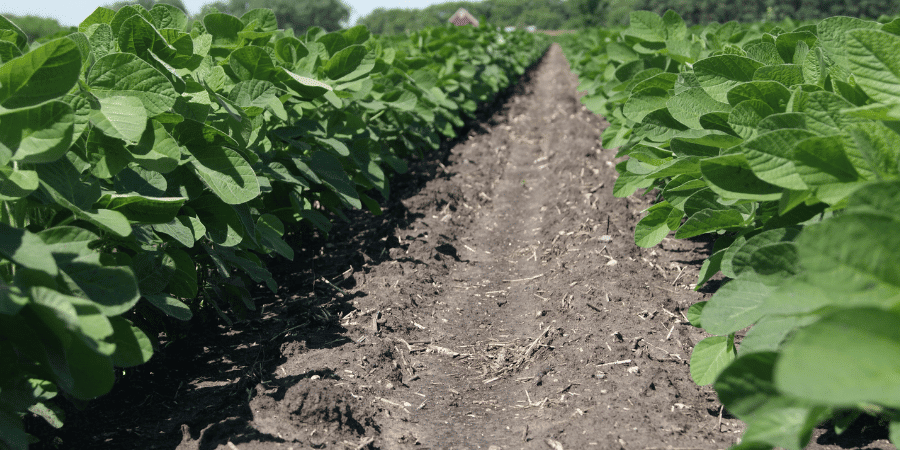 Distinct by Design: The Case for Soybeans

Dave Swanton is a grower just outside of Dauphin, Manitoba. He grows red spring wheat, canola and perennial ryegrass on his 3,000-acre farm. He also grows soybeans, which, to some growers in Western Canada, is an unpopular decision.

According to Statistics Canada, soybean acres have dropped to less than half of what was planted in 2017 (just over 3.1 million between Manitoba and Saskatchewan)—where this past spring saw just over 1.2 million between the two provinces. Some farmers have grown wary of growing soybeans again due to the low yields they produced from 2017-2019, as a result of drier growing seasons in Western Canada during that time.

Swanton, however, feels differently about this legume crop. One of the many reasons he likes soybeans, he says, is because he believes they are easy to grow.

“After you plant them, soybeans are a low-maintenance crop. You can just pretty much walk away from them in the summertime,” says Swanton.

We dug deeper with Swanton to find out why, even though soybean acres have declined in the past few years, farmers should give soybeans a second chance.

Swanton says his part of Manitoba typically receives decent moisture, but that wasn’t the case for a few years leading up to 2020. Like many other areas in Western Canada, the region had less rainfall than usual in the growing season, and soybean yields suffered.

Like most growers, Swanton knows that Mother Nature is unpredictable. He says his even temperament allows him to take things in stride and not get too fazed when uncontrollable events, like the weather, make his job challenging.

Swanton says he wasn’t tempted to reduce his soybean acres like other Prairie growers who have cut back on their soybean production and turned to other crops instead.

“You need to plan for a productive year because if you don’t, you can shortchange yourself,” he says. “You always have to go for a good crop.”

And he believes that soybeans are, in fact, a good crop.

Farm Better Off with Soybeans

Swanton is glad he stuck with soybeans—not only because he’s making money on his crop this year, but because without soybeans in his rotation, he believes his farm would be worse off.

Swanton says the practice of alternating between wheat and canola crops, which some farmers do, isn’t viable because of the disease issues this creates, particularly with Clubroot in canola.

Clubroot has been a growing concern since 2003, spreading throughout Western Canada. Read our blog post featuring Dr. Stephen Strelkov to learn more about Clubroot and his continued research to help manage the disease.

Swanton recognizes the value of a one-in-three-year rotation for reducing crop diseases, and for him, including soybeans makes sense. He likes the crop because not only are soybeans relatively easy to grow, they don’t have as many weed problems as other crops.

“When you plant soybeans, you know you have your weeds looked after. Two good doses of Roundup will take care of them. But with peas, lentils and other crops, weed control is more challenging.”

Swanton also says he can count on a price that’s fairly consistent when he goes to sell his soybeans.

Over the years, Swanton has tried a number of different soybean varieties from a range of seed companies. But there’s one that he always returns to: BrettYoung’s Akras Roundup Ready soybeans.

“They’re always my best variety, year in and year out,” he says. “I’ll be growing them next year.”

Swanton has been planting BrettYoung soybeans in his fields since he began growing the crop 10 years ago.

Talk to one of our Regional Account Managers to see what soybean option would best fit your farm, or learn more about BrettYoung’s soybean varieties on our website: Click Here.

Swanton knows there’s a chance his children could continue to follow in his footsteps by growing soybeans on the land his grandfather first started farming in 1950s. He says he’d be happy to see a fourth generation of Swantons running the family farm.

“We’ll leave it up to them. It’s their decision, and it’s here if they want it,” Swanton says.

Because he is thinking of the future of his farm, Swanton isn’t swayed by year-to-year weather changes. He believes he’s avoiding serious pest issues with a diverse crop rotation—a rotation that definitely includes soybeans.