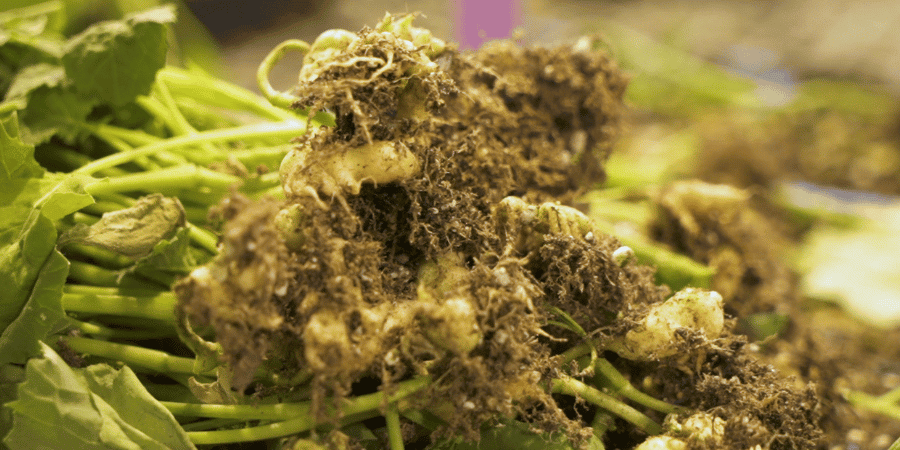 Distinct by Design: Making a Difference in Clubroot Research

It was August 2003, and Dr. Stephen Strelkov was beginning his career as a plant pathology professor at the University of Alberta, intending to specialize in Tan Spot disease on wheat, which had been the focus of his PhD and post-doctoral work.

One month later, the first case of Clubroot in canola was reported in Alberta.

“When that happened, it caused me to reassess a little bit and think, ‘OK, this is an actual, practical problem that people are now facing, and maybe I need to devote more of my energy to this,’” he says.

Dr. Strelkov adds that he knew researching Clubroot would be challenging because so little was known about how it would impact canola in Alberta at the time, but he felt it was something he couldn’t disregard.

“I felt I really needed to pay attention to it, and I’m glad I did because it became such a big issue.”

Clubroot is a growing issue in Western Canada, but Dr. Strelkov emphasizes that there has been a lot of progress in understanding and developing control measures for the disease.

Let’s learn more about Dr. Strelkov’s findings on Clubroot over the years, and how his research continues to help growers in Western Canada find solutions to grow healthy canola crops.

Clubroot Over the Years

“We didn’t know very much about Clubroot at first, particularly how it behaved on canola.”

Dr. Strelkov says that in the beginning, there were no management strategies besides telling growers not to grow canola for extended periods of time if Clubroot appeared on their farm. “There was very little else that we could recommend,” he says.

Since 2003, Clubroot has spread outwards from central Alberta into most canola-producing areas of the province and other Prairie provinces. Dr. Strelkov notes that Alberta continues to have the vast majority of affected canola fields — about 3,400 as of 2019 — but the numbers are going up in Saskatchewan (51 confirmed cases in 2019) and in Manitoba (35 confirmed cases in 2019).

Dr. Strelkov says it’s unusual for a soil-borne disease like Clubroot to spread so quickly. “The movement has been a lot faster than we would have expected if you had asked us, let’s say, 15 years ago,” he says.

“It’s definitely becoming a Prairie-wide issue, and it’s something anybody who’s growing canola should be aware of and keep an eye out for.”

Dr. Strelkov says that when Clubroot-resistant canola hybrids first became available in 2009, it was a big leap forward in Clubroot management. Since then, however, new strains have emerged in Western Canada that are capable of breaking down or overcoming first-generation genetic traits for Clubroot resistance.

As a result, much of the canola research in recent years has focused on characterizing new Clubroot pathotypes and identifying new sources of genetic resistance.

This leads us to one of Dr. Strelkov’s major contributions to Clubroot research.

The Canadian Clubroot Differential (CCD) set is a new system for characterizing Clubroot pathotypes that Dr. Strelkov set up with the help of other university and government scientists in 2018. This new system, unlike the previous system that existed, includes the newer strains found in Western Canada and distinguishes between the pathotypes that can overcome first-generation canola traits for Clubroot resistance and those that can’t.

The CCD set includes 36 Clubroot pathotypes. Of these, 19 are capable of overcoming first-generation resistance, although as Dr. Strelkov points out, many of these strains are localized. There are some strains (like 3A, 3D and 3H) that pose the biggest threat (in terms of number of fields affected) to growers in Western Canada who rely on Clubroot-resistant canola for protection against the disease.

By identifying and characterizing all the known Clubroot pathotypes in Western Canada, the CCD set provides vital information for plant breeders developing the next generation of genetic traits for Clubroot resistance.

Though these newer strains are a threat, it’s important that we don’t disregard first-generation resistance. Canadian breeders are finding out that if they create a variety that has a next-generation Clubroot resistance gene but isn’t also icombined with some variation of the original first-generation resistance gene, the variety may not be resistant to less severe but wider-spread pathotypes, like 3H. DL Seeds, BrettYoung’s canola breeding partner, is making it a priority to create canola products with stacked traits — which means all of BrettYoung’s Clubroot DefendR products have stacked trait resistance.

“There are different sources of resistance, and not all resistance will work against all pathotypes. So, for the breeders, it’s very important for them to know essentially what pathotypes they have to breed against,” says Dr. Strelkov.

To learn more about how DL Seeds is using this pathotype classification to inform the genetic resistance in their varieties, read “Distinct by Design: Breeding Clubroot-Resistant Canola.”

A Career Focused on Clubroot

Seventeen years into his career with the University of Alberta, Dr. Strelkov says he’s still happy to be a university professor, and not only because of the many rewarding research opportunities it provides.

“I really enjoy my academic position here,” says Dr. Strelkov. “I definitely enjoy teaching and working— and interacting with students as well.”

Over the years, Dr. Strelkov has published a number of works related to Tan Spot in wheat, like he had originally intended. His research covers a number of different diseases and crops, but he says that his main focus is still Clubroot — adding that he is grateful for the opportunity to help make a difference inthe canola industry’s campaign against the disease.