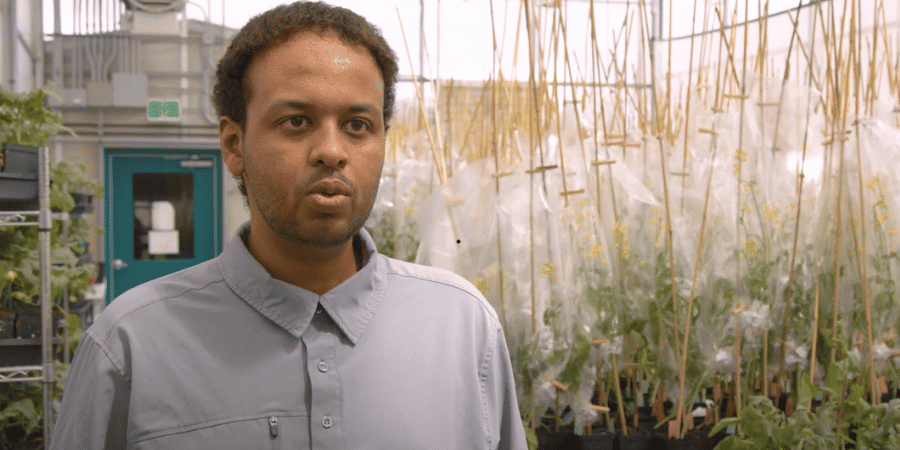 Many people in the canola-growing business hear the word Blackleg and think only about how it might affect their yield, if they think of it at all. But there’s at least one person in Western Canada for whom that word sparks excitement and anticipation. Because rather than focusing on the challenges of the past, he’s focused on the gene-stacking potential of the future.

That person is Sakaria (Zac) Liban.

Liban is a research scientist and Blackleg expert at DL Seeds in Morden, Manitoba, BrettYoung’s partner for canola breeding.

He is part of the team that’s been developing new varieties like 6090 RR and 6076 CR for BrettYoung that achieve a broader level of Blackleg protection by combining or “stacking” multiple genes in a single hybrid. Using genetic marking and other genomic techniques, he plays a vital role in this process by identifying new sources of genetic resistance that can be bred into elite canola lines.

Let’s take a closer look at why, as Liban points out, the increase in Blackleg presence has resulted in advances in canola breeding to better-equip canola growers for the future.

The Opportunity with Blackleg

“The industry is taking steps to mitigate Blackleg by releasing new hybrids to the market that provide different and more effective sources of Blackleg resistance,” Liban says.

In addition to new hybrids being released, plant scientists and breeders are also starting to introduce data-driven artificial intelligence (A.I.) and machine learning into the breeding process. A form of A.I. called machine learning, for instance, can be applied to genomic techniques that identify desired genetic traits — like resistance to Blackleg disease — in a way that’s faster than traditional phenotyping methods. This enables scientists like Liban to help shave years off the time it takes breeders to get superior canola varieties out of the greenhouse and into the fields.

“It definitely is an exciting time with all of these new tools that are being developed,” Liban adds. “The future holds a lot of opportunities.”

The Rising Need for Blackleg Resistance

Canola producers on the Canadian Prairies have had to deal with Blackleg since the 1970s, and in recent years, it’s become a bigger problem for many farmers.

Liban says the incidence and severity of Blackleg infections has been steadily rising over the past five years, especially in areas with intense canola production. “We are seeing an uptick in Blackleg right now, due to tighter rotations and the increase in the acreage of canola across the Prairies,” Liban says.

This has caused changes in the pathogen population, resulting in destructive new strains of Blackleg emerging, making it more difficult to manage.

Proper crop rotation can help prevent the disease from turning up in canola fields and also enhances the effectiveness of Blackleg-resistant canola hybrids in warding off Blackleg.

“A one-in-three-year rotation is the minimum to try to prevent Blackleg, and longer is better,” he says.

Another way canola producers can keep Blackleg at bay is to make sure they are checking their fields regularly for the first signs of the disease. Liban recommends farmers scout early and often in the season, looking for leaf lesions in the two-to-six leaf stage of the crop. He notes, “Spraying later on won’t be as effective since the leaf infections could have enough time to make it down to the base of the stem and cause significant loss.”

On top of crop rotation and field scouting, proper variety selection is key for reducing the impact of Blackleg, and it also means farmers don’t have to rely as much on more costly, chemical-based solutions to control the disease.

Planting canola hybrids with the highest level of built-in resistance to Blackleg offers canola producers their best chance of success. BrettYoung has an exclusive line of canola varieties that are high yielding and have major gene Blackleg resistance to defend against multiple strains of Blackleg (like 6090 RR and 6076 CR).

Canola hybrids that include multi-genic sources of resistance (or multiple major resistance genes) are great at defending against Blackleg. But if you’re using the same hybrid (or even same brand) over and over again, it increases the likelihood of the pathogen overcoming the resistance genes it contains. Liban says that’s why it makes sense for farmers to consider rotating Blackleg-resistant canola varieties in their fields, especially at the first sign that a hybrid is losing its effectiveness against the disease.

Looking to the Future

As for Liban, he plans to be on the cutting edge of scientific advancements (like artificial intelligence) that he believes will continue to transform canola breeding. Along with his role at DL Seeds, he happens to be pursuing a PhD in Genomic Selection – Plant Breeding from the University of Manitoba in Winnipeg.

“When the opportunity came to do my PhD, what I was most interested in was applying the machine learning tools that have been developed in other fields to plant breeding. I’ve seen some of these applications, and I’m very excited about the potential that this unlocks,” he says.

So while Blackleg is a real concern in Western Canada, BrettYoung is prepared and evolving to continue providing growers with gene-resistant and profitable varieties — especially with experts like Zac Liban as our partner.